“Gender equality is important notonly for fairness and equity, but also for economic efficiency, and is at the center of creating a more prosperous world.”

Let us remember too that it is not just that women raise the GDP. It’s also how they     invest their earnings.  Ask any successful African man how he got his start in life and he is very likely to tell you: “My mother (or aunt) sat in the local market selling her vegetables to pay my school fees. Without her I would not be here.”

I covered my ears against the deafening roar of  jet engines competing with the joyful ululations of mothers as the plane on the Nairobi runway headed for New York. The chartered flight was filled with hopeful sons and some daughters of Kenya’s villages who had scholarships from American colleges and universities. That was pre-independence Kenya, the “Kennedy Airlifts” arranged by JFK and Kenya’s trade union leader, Tom Mboya, who knew that his country would need many graduates to manage it after independence.  The students’ mothers had sold excess vegetables they grew and held tea parties to raise enough money to ensure their children’s places on the flight. Half a century later, Liberian market traders told us that their highest priority after family maintenance is to send their children through secondary school, then if possible to college as well (SMWF, July 2012).

In short, education of their own and other dependent children - the next generation - is a primary concern and strength of Africa’s entrepreneurial women. This human development goal is complemented by their other major contribution -  to economic growth.

Africa’s overall rate of economic growth is impressively high in the 21st century and was strong at 4.5% in 2014. The World Bank projects it will drop to 4% in 2015, remaining well above the global economic average of 2.9% (Stevis, 2015). Much of the responsibility for that rate is clearly stated: “Entrepreneurship is now widely acknowledged as the primary driver of sustainable economic growth. Entrepreneurs create new businesses, drive and shape innovation, speed up structural changes, introduce new competition and speed up an economy’s fiscal health” (Herrington & Kelley, 2012). Women’s entrepreneurship rate in Africa is higher than in any other region of the world (Kron, 2012) and most women work in the informal economy that is neither regulated nor protected by the state. This informal economy is defined as “that diversified set of economic activities, enterprises, jobs and workers that are not regulated or protected by the state” (WIEGO, 2015). Its importance is vivid:  the informal economy contributes about 55% of Sub-Saharan Africa’s GDP and 80% of its labour force. (African Development Bank. Recognizing Africa’s Informal Sector. Abidjan. 27 March 2003.) More women then men find livelihoods there, and many of them are entrepreneurs/own account workers.

According to the World Bank, women are crucial to economic growth, as seen in the opening quote above. Yet major obstacles, many of them gender-based,  impede the potential increase of women’s already substantial contributions. This fact testifies to the abiding global reality - including African: women are respected as hard workers, but their critical contributions to national economies and societies are not yet fully understood or acted on by governments, national leaders or investors. Given gender-sensitive policies and practices, however, their contributions can multiply. But first, a look at what they do. 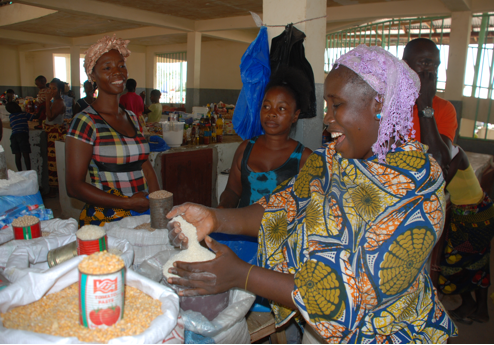 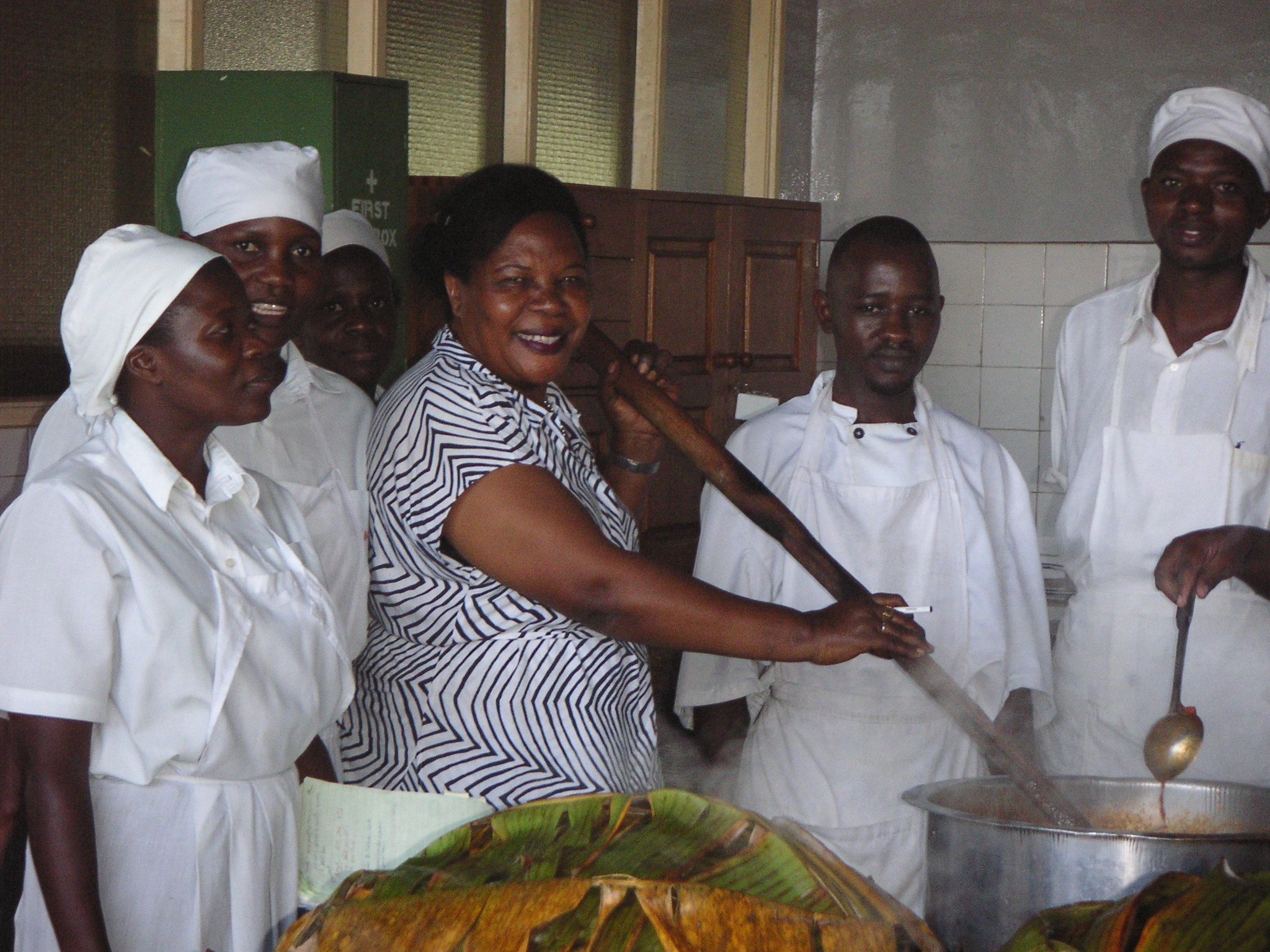 “My cow never failed to pay the children’s school fees.

“When a market woman is broke, her family and the public go hungry.”

In addition to the millions of women who work everyday as farmers and own account workers in the informal economy, there are thousands more who provide jobs for others by creating businesses in the formal sector.

Women plant, weed and harvest, milk the cows and collect the eggs on farms. Any surplus not needed for family consumption - a family may be 7 persons or more - is taken to market. Although they are just over 50% of the population, women produce 80% of sub-Saharan Africa’s food (Marime-Ball, 2013). In addition, they often add off-farm activities, for example, in Burkina Faso and other West African countries, they collect shea nuts, prepare shea butter and export some of it to chocolate and cosmetics industries such as the French firm Occitaine. The UN organization I helped to create, UNIFEM, assisted Burkinabe shea nut collectors improve the quality and value of their exports and obtain their own contracts, thus cutting out the middlemen.

In Kenya, women farmers and villagers increase their incomes to invest in the next generation by planting trees that provide shade, fruits and fuel. Their Green Belt Movement (GBM) was founded by the dedicated and charismatic Wangari Maathai, Africa’s first woman winner of the Nobel Peace Prize (2004), who applied for their first major grant from UNIFEM (now UNWomen) in 1980. Over 51 million trees have been planted in Kenya to date. (www.greenbeltmovement.org)

Thousands of women sit in daily or weekly markets selling shoe laces, cloth, fish, toothbrushes, vegetables, and other necessities, or they hawk their goods on the streets of African cities and towns. Some are the famed “market queens” of West Africa. All provide livelihoods for their extended families and break inter-generational poverty cycles by sending children to school. In Liberia, where 85% of daily market traders are female (SMWF, July 2012), market women kept food moving around the country during 14 years of civil war.  West African trade is largely a female activity; in Mali, for example, the contribution of women informal traders to national GDP is 46% (UN Women, 2010). But women’s work is often invisible in trade statistics when they cross borders informally, and transport by head-load isn’t counted. Counted or not,  “Women traders ...have been instrumental in establishing food distribution systems, which have protected food security, often without support from the state...”, the UN Economic Commission for Africa asserts (UN Women, 2010). 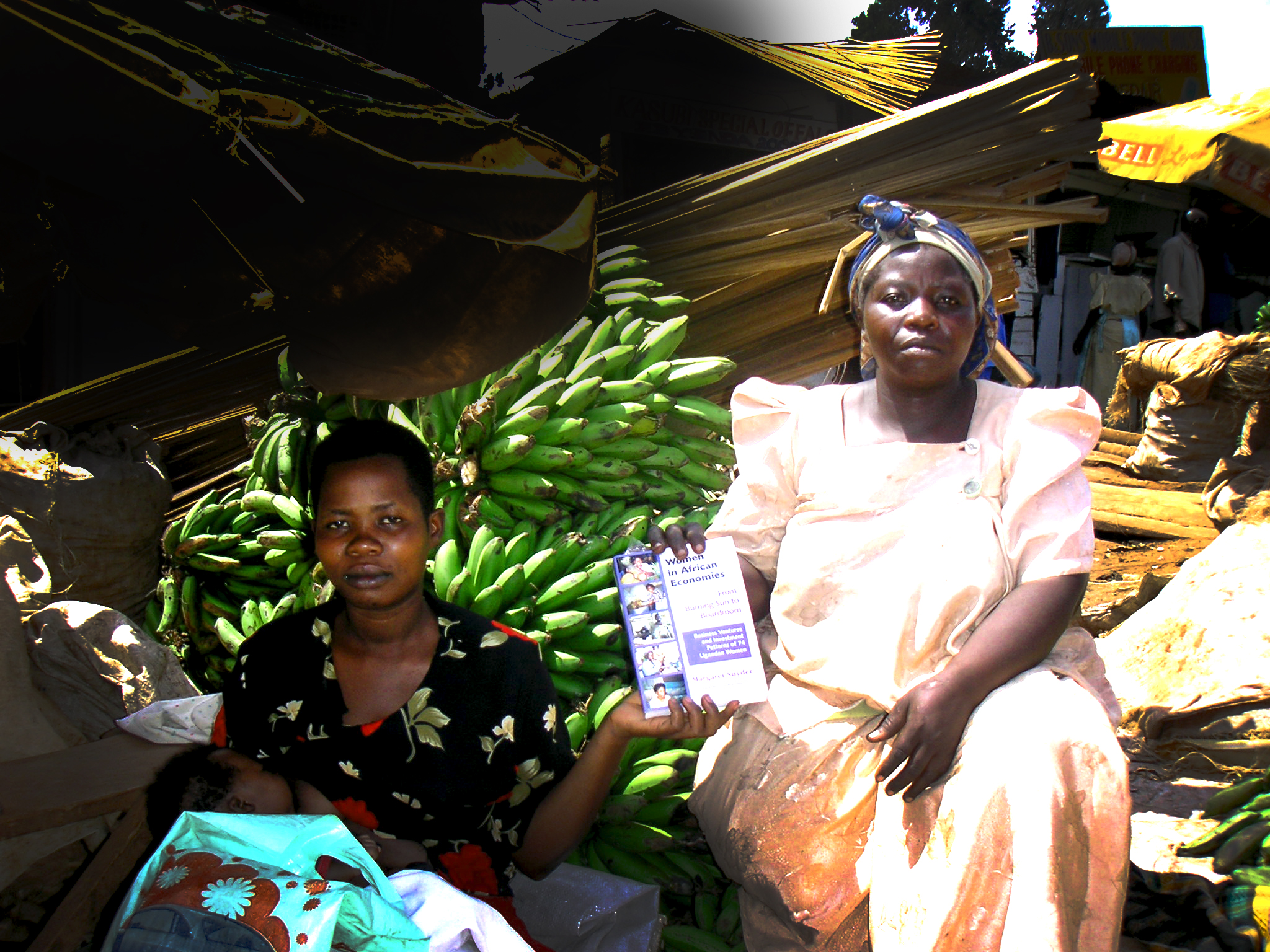 There are also examples of more formal entrepreneurship. Sapphira Nyabunwa started a cleaning business to pay her night class fees at the University. She contracts banks, government offices, private firms - to clean their offices and compounds, fumigate and control pests, collect and dispose of garbage and dry clean. Now hundreds of men and women workers for Safi Cleaners (Safi means clean in Kiswahili)  across the country, many of them school dropouts, can support their children and other dependents.

Victoria Nalongo Namusisi’s father bought each of his daughters a piece of land near Lake Victoria when she was 6 years old. After training in journalism and business management she became a progressive farmer, supporting and educating her own three plus 15 street children. A recent venture is on an island:  a small shop for staples that also charges phones by solar technology, whose proprietor is a former street girl (Kitakule & Snyder, 2011).

So courageous and resilient is this group of women that they have  been conveniently ignored by development agencies. (SMWF Proposal, 2014.)

The above examples evidence how women farmers, merchants and entrepreneurs both contribute to economic growth and foster human development through investing their income, whether monetary or in-kind, in the nutrition, health and education of their own and other dependent children. They thus reduce poverty and block its transfer to the next generation.

These achievements happened against nearly overwhelming odds, including wars, HIV/AIDS, and then ebola. Health and education systems, already fragile, were often undermined by economic policy “reforms” - Structural Adjustment programs-  imposed on developing countries by the IMF and other lenders following the escalation of oil prices in the early 1970s. Payment of old debts was prioritized over investment in people and national economies (Kentikelenis, 2014). Globalization’s neoliberal policies lowered tariffs on imports, facilitating an influx of highly competitive products.  Further, as the ranks of government workers were pared down with economic downturn, former civil service employees with families to support joined the ranks of traders, adding to the already fierce competition entrepreneurs faced. Yet most entrepreneurs and informal sector workers prevailed.

Obstacles to greater returns on women’s enterprises persist despite known ways of overcoming them. These are both generic and gender-specific (UN Women, 2010). The former include inadequate transportation and communications systems, tariff barriers and other policies that impact all entrepreneurs regardless of sex. Those obstacles that block the growth potential of women’s businesses specifically may be grouped in three categories: personal constraints, control over productive resources, and legal constraints. (Note that the following considerations are illustrative rather than comprehensive.)

“Without the personal autonomy Asante women expect, construct and defend, the trading system would collapse”

High on the list of personal constraints is level of education. There is a “direct correlation between the level of education and both the level of entrepreneurship and sustainability of the business”. (op.cit. African Entrepreneurship. p 32.) Women lag behind men in both formal education and formal training in business skills. While they are gaining in numbers in school classrooms,  compared with men, women endure “time-poverty” -  their innumerable home responsibilities limit the time they can commit to their enterprise or create supportive networks at evening and weekend meetings and management courses. To close these gaps, African business women build associations of entrepreneurs such as the Uganda Women Entrepreneurs Association Ltd (UWEAL), whose events are attuned to women’s schedules. 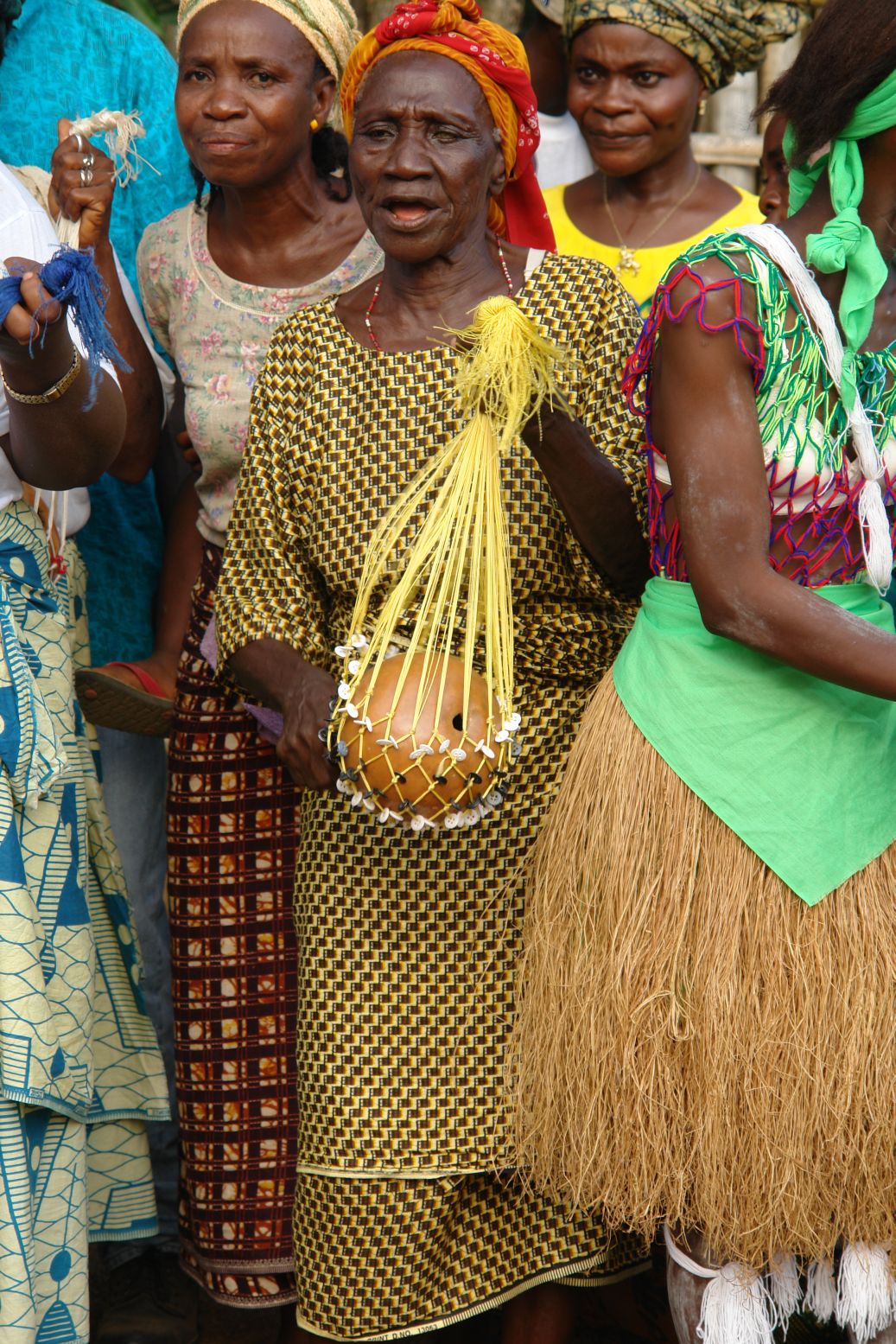 “If you have a little capital, you get a little profit, but if you have much capital you have big profits. That is our dilemma.”

Control over productive resources, including land, inheritance and credit, shows a stark difference by gender. As unequivocally stated by the Uganda Government : “Women’s lack of control over productive resources is one of the root causes of poverty”. (Ibid. p. 165.) Astonishingly, women small holder farmers who produce 80% of Sub-Saharan Africa’s food, receive less than 12% of agribusiness investments (Marime-Ball, 2013).

Restrictions on women’s ownership and inheritance of land often constrain productivity.  A woman farmer needs to own the land she cultivates, or at minimum to know she will inherit it should her husband die, since credit often depends on land ownership. And why should she improve the land if it will be taken from her? While widely available, micro finance offers neither the right amounts nor the right conditions for everyone, leading many entrepreneurs to prefer ROSCAs - Rotating Savings and Credit Associations (A form of co-operative, ROSCAs are called susu in West Africa and Merry-go-round in East.) that seldom have the large amounts of capital business women could use.  Recognizing needs for more than micro-finance yet less than banks’ minimum loans, UWEAL (www.uweal.co.ug) created its own co-operative: Women’s Investment Club (WIC).  The global loan guarantee organization Women’s World Banking, of which I was a co-founder, whose affiliates include some countries’ full-fledged women’s banks, created an Africa Advisory Council to focus on use of technology such as digital finance to effectively serve low-income women. (www.womensworldbanking.org) In 2014 The International Finance Corporation (IFC) created a new fund with $600 million - the Women Entrepreneurs’ Opportunity Facility - that works with local banks in sharing risks and extending credit to women owned enterprises.

There is a strong connection between gender equality and growth performance. (World Bank, 2005, viii)

The third and final area of obstacles to economic justice and increased productivity for women and their countries is the legal environment. Gender inequalities  exist in taxation, remuneration, ownership and inheritance rights, accessing capital, getting a job, going to school and obtaining health services. Current approaches to these legal discrepancies include both innovative policies and gender-sensitive national government budgets.

We need to recognize here, however that Sub-Saharan Africa had the most restrictions on women’s legal rights in 1960, and by 2010 had implemented the most reforms of all world regions (World Bank, 2005, viii).