Namur, Capital of Wallonia… Gateway to the Belgian Ardennes, a pearl born to the labour of love of the Sambre and the Meuse. Namur offers a rare and spectacular ambience, with its confluence right in the city centre overhung by a particularly impressive rocky spur. To each season its own charm; in its soul the city always remains warm and welcoming, its harmonious historic heart reveals its fine residences of the XVIIIth century, the Age of Enlightenment, whether you are walking in snow or sunshine. The peaceful atmosphere of the streets and alleys, even on very busy days, reflects the inhabitants’ taste for the art of good living! 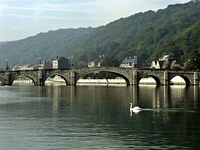 Namur was founded near the confluence of the rivers Meuse and Sambre. More precisely, the first settlement took place on the small plot of land exactly in-between the two rivers. This plot of land resembles a pig's head, hence the French name 'Grognon' (pig's head). A large, high  and long rock situated between Meuse and Sambre served as an ideal outlook post from where the Meuse valley could be overlooked and controlled. During Roman times people settled on the left bank of the Sambre river. It became a busy center with a lot of  blacksmiths and potters. Later, the first Christian churches were built in the small city. 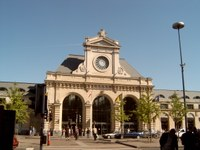 The Citadel of Namur has, at all times, held a strategic position in the heart of Europe. First of all as a command centre of an important earldom in the Middle Ages, it was then coveted and besieged by all the Great Powers of Europe between the 15th and 19th century. From 1891, it was transformed into a huge park, a real green lung overlooking the capital of Wallonia. Today, the tourist is the one that takes the citadel by storm and is the privileged witness of 2,000 years of History. Open-air discovery along pedestrian circuits marked out with historical explanations; underground discovery, travelling through the miles and miles of galleries laid out over the centuries for the defence of one of the biggest citadels in Europe.

Nowadays, Namur has grown considerably in importance. The city is now the political capital of Wallonia. Here are the seats of the Walloon government and the Walloon Parliament. Namur has a population of about 100.000 people.