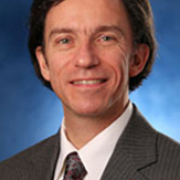 He has been a Visiting Research Fellow at the Catholic University of America in Washington, D.C., and a Visiting Professor at the Universita di Roma, La Sapienza in Italy. He is a Past President and Distinguished Fellow of the New York State Economics Association, and has been inducted into the international business honor society, Beta Gamma Sigma, as well as the Jesuit honor society, Alpha Sigma Nu. He has served as President of the Jesuit Business Deans, and founded the Mercy Business Leadership Conference.

While serving as the Faculty Research Coordinator for the Wehle School, he founded the Business Research Consortium, a professional association promoting scholarship related to business.  At Detroit Mercy, Eisenhauer founded the Center for Social Entrepreneurship, the Center for Practice & Research in Management & Ethics (PRIME Center), the Charlton Center for Responsible Investing, and the Financial Markets Lab.  On behalf of the College, he accepted the largest gift in the University's history, tripled freshman business enrollments and doubled graduate business enrollments.

Eisenhauer's research focuses primarily on the economics of risk and ethical decision-making. He has published more than 100 articles and reviews in professional journals, and his work has been cited more than 2,200 times in books, journal articles, working papers, monographs, and doctoral dissertations worldwide.  A 2017 study in Risk Management & Insurance Review* found him to be the among the world's most influential scholars in risk and insurance over the past quarter-century, stating, "Eisenhauer holds first place for total citations per article...[and is] the top author based on citations appearing in noninsurance journals as well." He has been an external evaluator for public and private colleges, and as a reviewer for numerous manuscripts submitted to book publishers and scholarly journals.